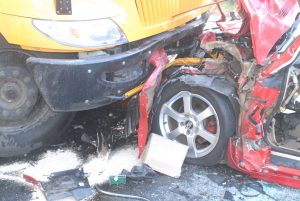 In 2015, vehicular crashes involving at least one large truck or bus were involved in an estimated 6,263,000 nonfatal crashes and killed 3,838 people in the United States.

Anyone who has been driving for any period of time on the modern-day rifle ranges known as Massachusetts highways has driven by and seen first-hand the devastation caused by automobile collisions. The carnage can be exponentially worse when one of the involved vehicles is a bus or truck. This is due to simple physics.  Force = mass x acceleration. The more something weighs, the more force it will impart at a given speed when it strikes another object. School buses are a particular concern. They often contain our children, do not have seat belts and weigh about 30,000 pounds. Large trucks weigh even more and can cause devastating injuries and death. Even smaller vehicles like pick up trucks can cause horrific tragedies and unfortunately illustrated by a February 19, 2020, collision in Florida that killed three Massachusetts residents and injured others.

Following a collision involving a commercial truck or bus, and really any vehicle with an airbag, it is important that an injured person take certain steps as quickly as possible to best preserve their rights. Indeed, in an ironic twist on the pejorative term “ambulance chaser” some insurers and defense law firms have rapid response teams designed to get to truck and bus collision scenes before the vehicles are cleared from the scene. These defense insurers/firms – in their effort to limit their legal exposure — know the value of seeing the scene with their own eyes, taking photos of the scene from the perspectives that put their employers in the best possible light and quickly identifying percipient witnesses. Of course, these corporations usually have an enormous advantage over an injured party. First, they are not injured and on the way to the hospital. Second, they have other people to begin the “risk management” process. Nonetheless, the sooner an injured party gets counsel working on their behalf, the better.

Many of these large commercial vehicles come equipped with multiple electronic systems that can be of great assistance to an injured party. First, in school buses, many use cameras to monitor students and the surrounding areas. Second, most of these vehicles are equipped with Event Data Recorder [EDR] technology that may record operational data like speed and braking activity in the seconds before a collision. Third, many of these vehicles are equipped with GPS technologies and monitoring that can provide precise location and operational data that can make or break a case.  Even smaller private vehicles with air bags have EDR technology that can provide vital and unbiased information about a crash. Getting to this information early – preferably before the vehicle gets turned back over to the likely Defendant or its insurer and before such data can be lost or overwritten – is always a good idea.

The lawyers at HBMHLaw have extensive experience in cases involving injuries caused by collisions involving vehicles, including trucks, buses and vans.  If a loved one has been injured or killed due to the negligence of someone else, please call for a free consultation.